Teaching kids about money? Here's a great money counting game that they'll have lots of fun with and learn that all important skill of counting the cash.

Skill: Know combinations of coins that equal the same value

Object of the game: Be the first player to run out of dominoes 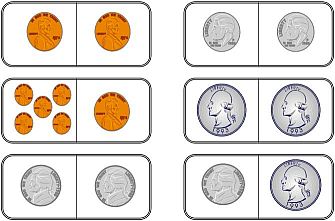 You will probably also enjoy this counting money math game that you can also print.

Afterwards, be sure to head on over to the main money games page where we have all of the money games on the site listed. You'll find the link to that page below.