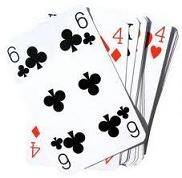 Whether your child is doing addition, subtraction, multiplication, or division, there are math card games that kids will love and help improve their math skills at the same time!

Materials: A set of game cards for each pair of students

The goal is to get three matching cards (cards that show the same number of tenths). Players take turns drawing the top card from the pile and discarding one card from their hand.

Students should name the discarded card, then place it face down under the pile.

The first player to get three matching cards showing three different representations wins the game.  The winning player should name the cards and then reveal them to the other player for verification.

Increase the length of the game by asking the players to get rid of all their cards instead of letting the first match win.

Ask that the winning player get four matches instead of three (four different representations).

Play three different versions of this game to get practice with place value, addition, or subtraction. Hi-Lo" can be played as an addition, subtraction or multiplication game. Division is also possible, but may be more difficult for younger students.

Addition version The two cards are added together. The highest number takes all of the cards.

Subtraction version Players takes the higher number of the two cards and then subtract the lower-numbered card. In this case, the lowest number wins all of the cards.

Multiplication version Played the same way as the addition game, except that the two numbers are multiplied together. In the event that two or more players have the same sum, difference or product, those players engage in a tiebreaker, where each player draws two more cards. At that point, the winner takes all cards from the initial round and the tiebreaker round.

Math takes practice and at times can be hard. Playing math games takes the hard work out of practicing as well as learning new math skills.

You might also want to check out some of these fun math card tricks that kids seem to really enjoy!