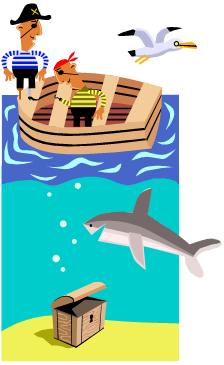 Are you ready for some math learning games?  We've got plenty for you to choose from!

Two players are on a quest for buried treasure, while the third player acts as their guide (and checks the answer key). Play several rounds so everyone has a turn to be the guide.

Object of the game: Reach the treasure chest the most times

3. The second player follows in the same manner.

4. Play continues until one player reaches the buried treasure. He writes his first name on the treasure chest.

5. For the next round, the winner becomes the tour guide.

6. Play a third round so that each player has been the tour guide one time. Or, play as many rounds as time allows.

7. The winner is the player who has reached the treasure chest the most times.

Now, if you enjoyed that game and are ready to move up, try one of our fun math activities for addition and subtraction for 2 and 3 digit numbers.