Printable fraction games are a fun way to learn about fractions!

Fraction Fiasco - The new Fraction Board Game you can print, that makes adding and subtracting fractions fun exciting for kids! 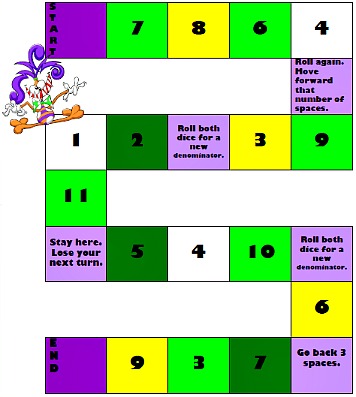 Players are never quite sure who will win this one, because they get bounced back and forth throughout the game. The good news is they’re also getting lots of addition or subtraction practice!

Object of the game: Be the first player to reach END

Supplies: Game board, two dice, a game piece, paper and pencil for each player

Fraction Flip: A fun printable game to help students practice multiplying fractions. All you need is a deck of playing cards and 3 to 5 players and you're ready to play!

Fraction Feud: This is a fun way to help kids practice comparing fractions. Just print off the Fraction Feud Cards from your computer and let the feud begin. This game can be played with 2 or more players.