Not only are math magic tricks a fun way to amaze friends, they can also help kids build some math skills along the way! In this math trick, the math magician performs an instant calculation by quickly giving the sum of any four numbers a volunteer covers up! 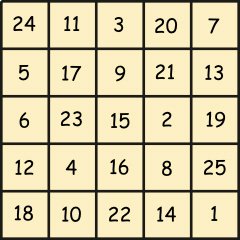 Ok, you printed the magic square, right.  Good!  The first thing you need to know before I show you the trick is the square that you see on this page is special.  It’s actually called a magic square.  No kidding......Do you know why it’s called a magic square?  Notice what happens if you add up all the numbers in the top row.

Now take a look at the second row.

I'll show you how to find the number to subtract from 65 with a few examples. Look at the first example below.  Here you can see someone covered up four numbers at random with the green square. 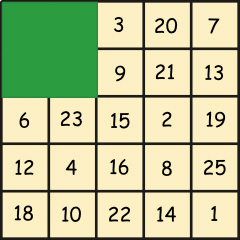 If you try to go diagonally in any other direction, you will not be able to go two numbers over.  Take a look at the picture below.  Notice that you can only extend the line two numbers in one direction.  The number you arrive at is 8. 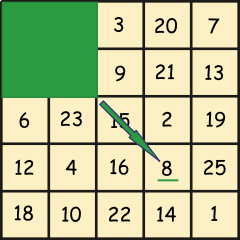 This is the number that you subtract from 65.

So the numbers that are covered add up to 57.

Have Fun With It!

By the way, I am going to add more magic squares on this page so you can use different ones. So check back in a day or two.   You can also find out more about magic square puzzles here.   For more math magic tricks go to the math tricks page by clicking the link below.