The Math Magician predicts the sum of the

four numbers even before the trick begins! 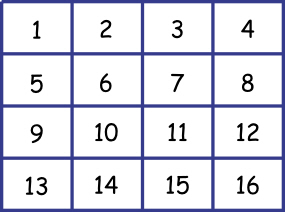 What You Need: Paper, Pencil, Calculator

How To Perform: Tell your friend that you are going to make a prediction.  Write down the following on a piece of paper without letting them see what you are writing:

The sum of the four numbers you choose will be 34!

Fold the prediction up a few times and set it aside. Hand your friend the chart you made.  Tell them to circle any number on the chart.  See example below. 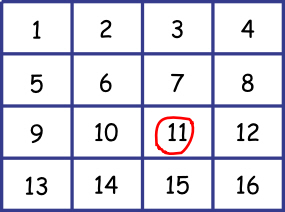 Next have then cross off all of the numbers in the same column and row of the number that they circled.   See below. 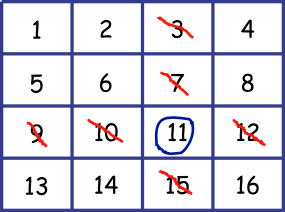 Now ask them to circle any number on the chart that is not circled or crossed out.  After they circle their number, have them repeat the same process as before (cross off all of the numbers in the same column and row of the number that they circled.) 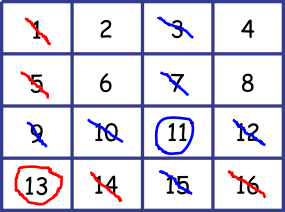 Then tell them to repeat these same directions until they have four numbers circled and all other numbers are crossed out.  After they circle the fourth number, there should be no more numbers to cross out. 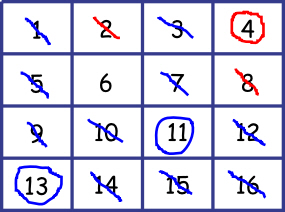 Now they just have one more number left to circle and then we are ready for the grand finale! 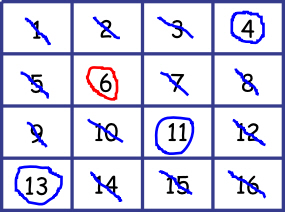 Have them add together the four numbers that are circled and announce the total to you.  Next unfold the paper that was placed aside to reveal the prediction.  It will always match their total!

Secret: Let's see why this trick works. Anytime you have a square array of consecutive numbers, the sum of the four circled numbers will always be the sum of  either of the diagonals.

So there's really no need to add up both diagonals.

If your friend wants you to repeat the trick 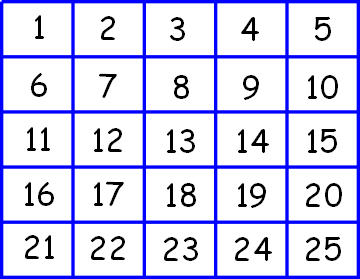 The prediction sum for this set of numbers will be 65. Just add up either diagonal and the sum is 65. And there you have it, another cool math trick to amaze friends and family!