Need more ways to turn math into a fun, exciting learning experience?  Kid math games come in handy for doing just that!  I'm a firm believer that math can and should be fun for kids!

Hey guys...
New Game Cards for this game. Addition Sums up to 24. 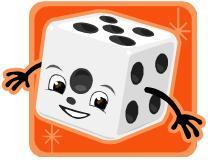 Object of the game: Earn the most cards.

Note: There are two sets of game cards that can be printed above.  The game is played using one set of cards at a time.  Choose the set you need depending on skill level of the players.

Preparation: Photocopy the game cards, cut apart, and place face down on the table.

The game can be played with either set of game cards.  The rules are the same for either set.  The example below is using the set 1 game cards.

You might also enjoy this Three Dice Addition game.  It's another fun way for the kids to memorize the math addition facts!  Don't forget to check out the other addition games on the site.

As teachers and parents we want to help our kids have an "I Can Do This" attitude when it comes to math!  There are a variety of ways to nurture a love for math with children and one of those is through using math games.

Maybe you think there's no hope for your child or for most of the students in your class.  Not so fast!  There are plenty of kid math games to go around that can create a least some excitement in the most math anxious child.

And that my friend - is all we need - a chance to encourage them with more of the same!