How about a fun exponent game that students will find themselves wanting to play again and again.  It's a simple game that kids can really have fun with. All you need is a deck of playing cards. 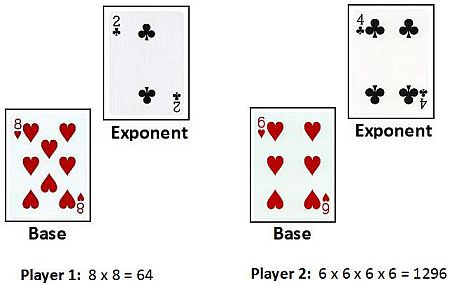 How to Play: Decide who the dealer will be rolling a die. The person with the higher number is the dealer.

So that means the winner of each round will get a total of two cards from each player, their base and exponent cards.

Turn the cards face down and spread out so that each player in the face-off can draw one card. This is to determine who will shuffle and deal the cards for the face-off.

The player that draws the highest card will be the dealer for the face-off.The face-off is done just like a normal round. The winner of this face-off round is then the wins the tie-breaker and collects all the cards that were turned over in that round.