So you're looking for some fun ways to teach division.  Division Math Games are a blast and we've got plenty of activities for teaching learning those division skills.

(A Division and Factor Game) 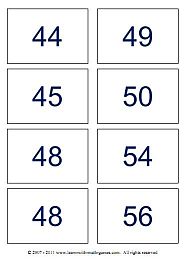 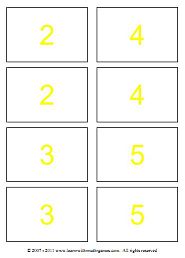 Put the cards back in their decks, shuffle them, and turn over one blue card and one yellow card to begin another round.  You can play for a certain amount of time (whoever has the most points wins), or you can play up to a certain total (21 points, for example).

If you prefer, you can turn over the blue card by itself, giving each player a few seconds to think about the number and what kinds of factors it could have.  Then turn over the yellow card and get ready to say “Gazinta!” or “No!”

Check out the online division math games below...

DIVISION MACHINE ACTIVITY: See how many points you can score with this division game.   Three different skill levels to choose from.

SUM SENSE DIVISION: Drag an Drop the number cards to make a correct division statement.  Try to answer as many problems in limited time.

What about those Divisibility Rules? They can come in real handy for helping know what numbers will divide into which number.  This next activity is good for helping students learn their divisibility rules.