These division activities give your students a chance to build their division skills while they play. They'll enjoy this division board game....just print off and you're ready to play! 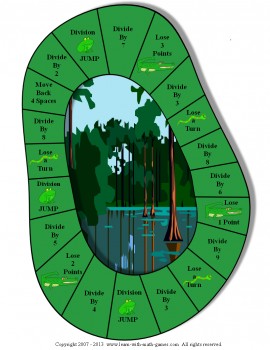 What you need: pair of dice, game board, deck of cards

Object of the Game: To score the most points by correctly answering division problems while traveling around the game board.

Player 1 draws two of hearts, five of spades, and six of clubs.  Player 1 arranges these three cards horizontally in any order front of her.  She chooses to form the number, 362.

If you're looking for a division activity for helping them kids with division facts, you might like Don't Duck Division.

Be sure to check out the other division activities on the site. We'll be adding more division games in the near future so come on back and visit us often.  Also if you have any suggestions, please let us know.

Return from Division Activities to Learn With Math Games Home