The Decimal Place Value Chart - A great tool that helps students as they're learning to read and write decimal numbers.  We need to make sure kids understand the difference between a whole number and a decimal number. 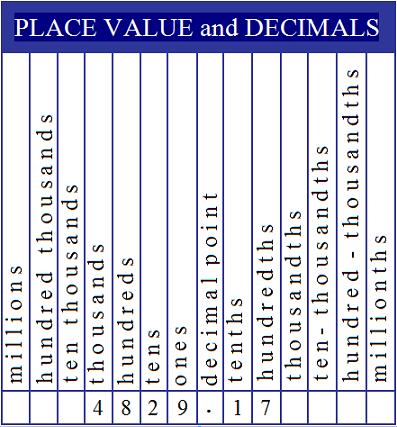 Now, take a look at the number

at the bottom of the place value chart.

And finally, the 7 is in the hundredths place. .07

(More about these last two later)

So when we put all of them together, the number written out in words is:

Take a look at the table below to see how decimal numbers are written in words, written as fractions, and then written as decimals.

What students need to know about decimal numbers...

Now that you have a pretty good idea of how decimals work, you'll probably enjoy checking out our decimal games pages.

And here's a fun decimal activity you can print for learning decimals.

Place Value Chart: And here's another decimal place value chart for more practice. The number on this one is a lot larger. Ready for it....53,712,009.328. Can you say this number in words? If not, be sure to click on the link above for an explanation.