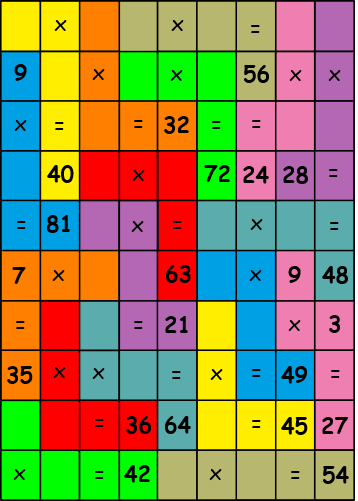 Your students will get a kick out of playing this times table game. It's fun and engaging and helps them memorize their multiplication tables!

Object of the Game:

To Conquer more of the game board than the other players by creating correct multiplication facts.

Players complete multiplication-facts by placing their number cards in the empty squares.

The objective in rolling the dice is to roll a number that will complete multiplication facts on the game board.

On each dice roll, player has several options:

1) Choose one of the two numbers rolled.

2) Choose the sum of the two numbers rolled.

4) No numbers on the dice can be used.

The first player rolls a 6 and a 2 on the two dice.

The multiplication fact below is on the game board.

number card "8" placed down on game board

Keep in mind, the player could have also put down their 6-number card instead of their 8-number card on the board, because they rolled a 6 on one of the dice.

So in this example, the player with the blue number cards is the only player that can complete this multiplication fact.

How To Play Continued...

After a player puts their number card down on an empty square, other players can challenge, if they think the number card has been placed in an incorrect spot. (It can also be challenged later in the game if it is missed right away.)

If the number card was laid down in an incorrect spot, the player who placed the card down picks up their number card and play continues with the next player.

Are they having fun with learning their multiplication tables yet? How about another times table game.

If they liked this one, chances are they'll enjoy Rolling With the Facts - another times table game that's really a big hit with our visitors.