Alright math magicians..., You're at the right place for more math tricks for kids. We will continue adding more tricks so be sure to check back often. 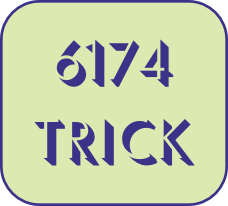 What You Need: Piece of paper and pencil

Not at the Magic Number yet, so they keep going.

And just like magic.....they will reach the Magic Number! (See below)

Pretty Cool!  It works every time.

Note: It might be a good idea to make sure they are doing the subtractions correctly, otherwise they may not get to the Magic Number.