If you're looking for a great way to excite and engage your math students, magic square puzzles are a no-brainer!  Magic Squares help kids use their brains and have fun reviewing addition, multiplication, fractions, decimals and more.

You'll find a variety of magic square puzzles, worksheets, and games that you can get to from this page. You can print them in pdf format. I'll keep adding more puzzles so feel free to let me know what you'd like to see more of.

The magic squares you'll find here range from the smallest, 3 by 3, to 6 by 6 magic squares. And they involve addition, multiplication, fractions, or decimals. So grab a pencil and get your game face on!

Ideas for Teachers and Parents

The addition square is the most popular type of magic square and the one you may be already familiar with.  Below is a picture of a square with the numbers already filled in. 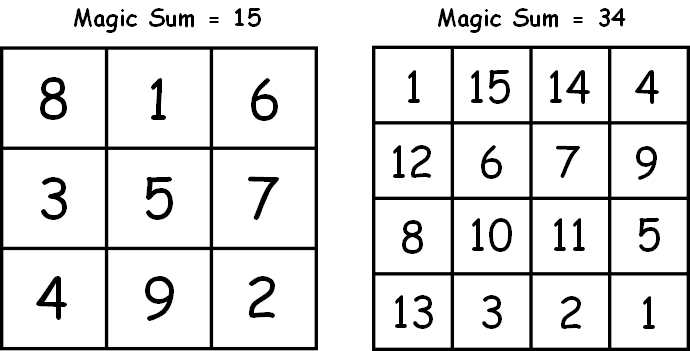 The size of magic squares range from the smallest, 3x3 (3 rows and 3 columns), to very very large.  The world record set in 2012 for the largest magic square ever printed was one with 3559 rows and 3559 columns!  Don't worry, we won't be solving any over 8 rows and 8 columns.

Lots of people are less familiar with Multiplication magic squares. They're great for helping kids build multiplications skills in a fun and engaging way! They work the same way as the addition square except we use multiplication instead. So all the rows, columns, and diagonals will have the same product! 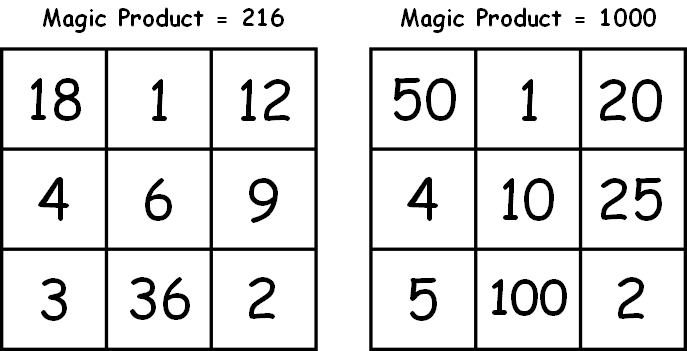 Note: I will be adding more magic squares in the next week or so, to include fractions, decimals and larger addition and multiplication magic squares.