Kids not feeling the math lately. How about some fun math tricks to help them see how cool math really is!

We all appreciate a good ol' magic trick, especially the kids. You might even be a little surprised to see their eagerness and excitement to learn math magic tricks.

"I'm going to now make a prediction and write it down on this piece of paper and at the end of the trick, I'll uncover my prediction."

Now for the cool part! 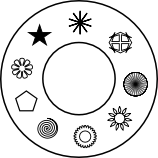 They should begin their count starting on the picture below: