Math games are cool! And your kids will have a blast with elementary multiplication games....and becoming brighter students. Multiplying is a key skill in developing higher level math skills. 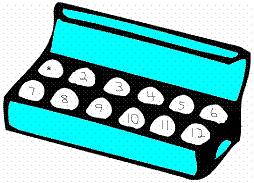 Let us know if you have any suggestions of the types of games you'd like to see more of.

Have you signed up for our free Math In Motion Ezine yet? You'll get fun math freebies and know every time we add something new to the sit. See you soon!