Do the Math Hopscotch Game 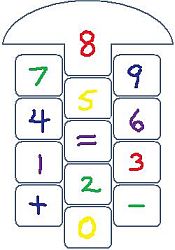 "Do the Math Hopscotch"  is a great math game for young learners inspired by a similar version from the book "Game On!" by Pat Doyle, a bit of math adds an educational twist to hopscotch.

And the winner is...

The first person to work through all the numbers to 9.

Try adding more numbers to your hopscocth grid to cover more addition and subtraction facts. Be as creative as you want to be. Keep in mind you can put the numbers in what ever order you want to.

Return from Do The Math Hopscotch to Math Games Home