Get Ready to Roll with Fun and Exciting Dice Math Games!  The kids are going to enjoy these fun dice activities and learn some math too. 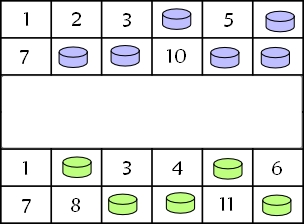 What You Need: Game board, pair of dice, 12 markers for each player

Object of Game: Players fill in all the spaces on the opponents side of the board with their markers by doing addition and subtraction problems on the dice.